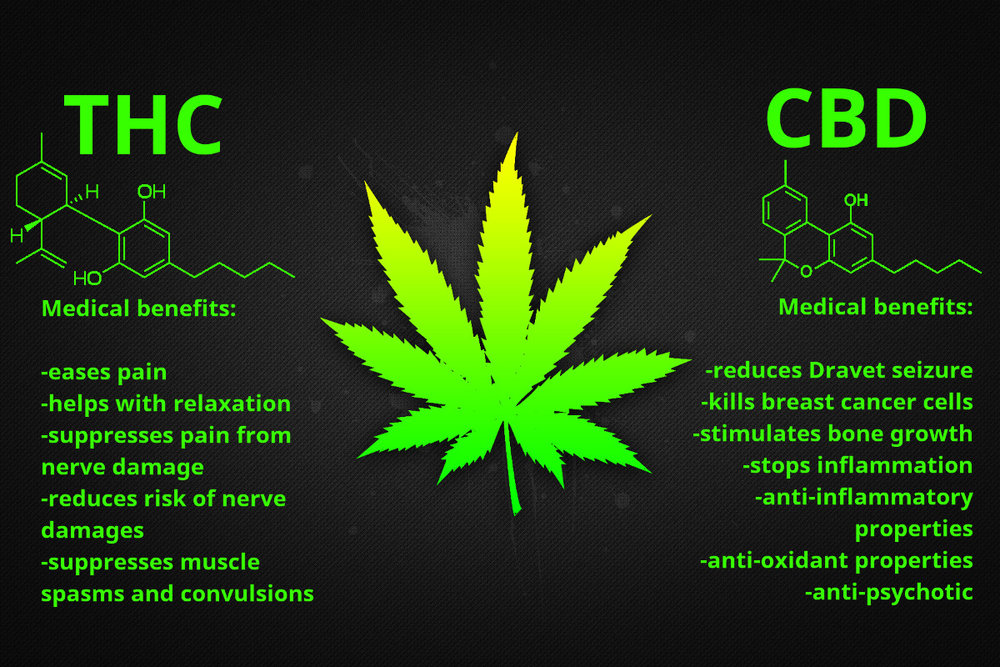 CBD vs THC: What are the effects, what are the differences? How to recognize each other? In this article we will try to illustrate the main effects and benefits of CBD by comparing it with THC, exploring the various possibilities offered by the two marijuana compounds.

CBD is an acronym for “cannabidiol”, while  THC indicates Tetrahydrocannabinol: these are both the main compounds of the marijuana plant, but they have very different effects from each other. Some Sativa hemp plants contain a higher amount of THC, others abound in CBD. While THC is (for now) declared “outlawed” all over the place, as far as CBD is concerned it has numerous uses and recognized medical-therapeutic properties, which allow it to be used for the treatment of numerous pathologies and even serious diseases.

CBD and THC: the difference between the two compounds

Both CBD and THC possess important properties and beneficial health effects. THC has antiemetic and anti-inflammatory properties, is an antispasmodic and stimulates appetite, for example. CBD has an immunomodulating and anti-inflammatory effect, has antidepressant, relaxing and even antipsychotic properties. This is why some of the drugs that have CBD at its base are used to treat diseases such as epilepsy, schizophrenia or other rather severe neuropsychiatric disorders.

CBD oil (the form in which CBD is most often found on the market) is legal in many countries and appreciated for its numerous beneficial effects. THC, on the other hand, is banned almost everywhere and can only be taken with a medical prescription and in case of really serious illnesses.

THC is the psychoactive compound of cannabis and is included in marijuana for recreational use. CBD counteracts the psychoactive effects of THC. For this reason, in marijuana that is commonly used to “get high” we find a high THC content in relation to that of CBD. This is because the two compounds bind to different receptors present in our organism, causing very different effects for this reason.

In essence, the difference between CBD and THC is that THC acts on the central nervous system causing alterations in the mind and psyche. While CBD does not cause alterations in the mind and for this reason it has been much easier, by the medical-scientific community, to accept the use of marijuana in the medical field and for therapeutic purposes.

THC differs from CBD in some features, as we have seen. For this reason, finding them together is difficult (also because, as mentioned, the effects of one counteract the effects of the other) and often those who accept the use of CBD are then opposed to the use of THC.

THC has some unpleasant side effects (anxiety, paranoia, memory loss) that often make its use inadvisable and inadvisable in the medical field. CBD, which does not have these effects, is particularly appreciated because instead, it acts in a way that counteracts them. This is why CBD is used to treat epilepsy and schizophrenia, obsessive disorders, panic disorder. Instead, those who regularly smoke marijuana have an increased probability of developing psychic damage, even permanent, in addition to the side effects examined above. Anxiety, paranoia, even severe psychosis. CBD could cure these adverse effects as well, but many point out that further studies are needed in this regard.

Other beneficial effects of THC have been observed on people suffering from sleep disorders, particularly sleep apnea. In these subjects, a reduction in apneas and sleep interruptions was observed. On the other hand, an increase in wakefulness was observed for those who used CBD. For this reason, drugs that act on states of insomnia and containing THC vs CBD are being studied.

CBD vs THC: effects on asthma and appetite

With regard to asthma, numerous studies have demonstrated the validity of CBD in alleviating the disorder. And inhalers containing THC were also being studied, which were then rejected. CBD for treating asthma has, on the other hand, been recognized as a valuable ally.

THC and CBD are also effective tools for stimulating appetite. Even in the case of anorexia, CBD has been shown to help those with problems gain weight. THC is known for its property in increasing the appetite of those who consume cannabis for recreational purposes, which is why those who “smoke” have the so-called “munchies” afterwards.

CBD and THC are also very useful and known for their wonderful anti-inflammatory properties. A drug (available by prescription only) for the treatment of a serious disease such as multiple sclerosis, Sativex, acts on spasms and pains with effective calming action.

Both of it could also have beneficial effects on the brain. While most drugs suppress neurogenesis, i.e. the growth of new neurons, CBD and even THC could, on the contrary, favour it, with a neuroprotective effect in general. Some patients with Alzheimer’s have even seen benefits after taking CBD.

CBD and THC together against Post-traumatic stress

Those suffering from Post-Traumatic Stress Syndrome (PTSD) may find it beneficial to use CBD and also THC: many studies confirm that CBD and THC could alleviate the negative effects of traumatic stress (nightmares, flashbacks, anxiety, depression. CBD and THC also have a positive effect as antiemetics, therefore in the effective treatment of symptoms such as nausea and vomiting.

Clinical studies have focused on the beneficial effects of CBD and THC on certain types of cancer, although the results are all still under consideration. However, THC appears to be capable of inhibiting the tumour’s ability to develop new blood vessels. Research is also being carried out against melanomas; according to scholars, the best combination would be a mix of CBD and THC.

So: as we have seen, CBD and THC have numerous differences but also share beneficial effects and therapeutic properties, even against some types of cancer.

CBD is a non-psychoactive cannabinoid; THC, on the other hand, is the psychoactive compound of cannabis. For this reason, if the first is illegal almost everywhere (there are drugs that contain it, but they are available only for some serious diseases and upon presentation of a medical prescription) the second is increasingly favoured by study and research in the medical field.

For any doubt, question or request, you can use this form to get in touch with us. We will be happy to help you!